A new year brings the promise of a new life, new possibilities, and of course, the siren song of resolutions.  Even when we know they can be unrealistic, problematic, and sometimes ill-timed, nonetheless it is hard to resist making New Year’s resolutions.  I for one haven’t had much luck with mine in the past, usually jumping ship by mid-February due to impatience, injury, illness, or lack of funding and sponsorship.  Past resolutions have always been kind of self-centered, like trying to lose weight that has been creeping up on me.  Or a bit ambitious (paying off credit card debt and a car loan, and selling my husband’s truck, all before summer vacation!), leaving me to wonder if maybe this year I need to scale back and think differently about my goals.

As rough and woolly as 2013 was, I achieved my resolution to get our family out of debt and sell my husband’s truck to a really nice family.  I also finally accomplished the long anticipated goal of losing that  weight!  Don’t ask me how; I suspect that it might come back soon because I don’t exercise and I eat bacon and white rice all the time.  But hey, it counts for now!  The point is, my resolutions were accomplished not entirely under self imposed schedules, but after several series of circumstances had played out in my life.  This is why I think it is time for me to reconsider resolutions.  There is nothing wrong with wanting to self-improve, but maybe self improvement comes when we look at life from a different angle.

The definition of resolute is: “admirably purposeful, determined, and unwavering.”

Synonyms include: resolved, tenacious, firm, strong-willed, unshakable, spirited, brave, plucky, stalwart, courageous.  There are many more, but you get the idea! 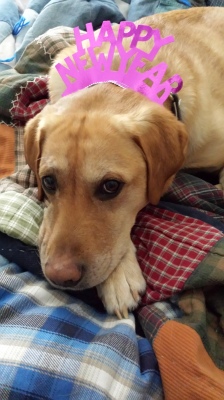 The Party Animal has left the building.

As noble as ‘being resolute’ sounds, the downside of a resolution is that sometimes no matter how resolute we try to be, we just don’t reach our goals.  For example, I spent more years than I care to count worrying about my weight and giving myself a pretty short deadline every year to lose that weight.  It never happened.  Finally, after I stopped making my weight the central theme of my life and turned my focus toward my overall health, I encountered the success I desired.  We can’t always force resolutions on ourselves and then make them happen the way we envision; sometimes the journey of self-improvement takes longer than our predetermined itineraries.  As my husband always says “timing has everything to do with the outcome of a rain dance.”  We can’t rush what Providence has planned for us, and sometimes the journey involves much more adventure, patience, and self discovery than we originally had in mind.

What I am saying here is that despite your best efforts, plan on failing at some of your resolutions during life.  I know a few readers won’t like that statement, but more often than not, we don’t accomplish our resolutions the way we think that we will.  This is where we have to reexamine what being resolute really means to us as individuals.  Being resolute does help us accomplish goals, but we also have to be flexible enough to go with the flow, so to speak, when obstacles get in the way.  For years, I tried to train for whatever 5k race was coming up in the springtime…and ended up with shin splints and messed up knees.  I had to eventually adapt to something more practical for me…yoga and long relaxing walks.

This is not to say that I think we shouldn’t push ourselves and face new challenges.  The fact that I started a blog and began writing again after a decade of dormancy (another past New Year’s resolution) is evidence to myself that I can and should push myself to the limits.  And you should too; just don’t entirely give up if it seems like you aren’t attaining your goals.  It might just be that it isn’t quite time for the triumph yet.  Remember that you are on a journey, keep trying, and be flexible.

With that in mind, my New Year’s Resolution for 2014 is to be here.  By being here, I mean not being preoccupied with what I think I should be doing, what goals I should be setting and accomplishing, but to be in the here and now, with my family, my friends, the people who depend on me, taking my journey one day at a time.  I can be resolute in my journey knowing that I am learning as I go.  If I do it right, everything else will fall into place.  If I don’t, everything else will still fall into place.

Wishing you a Happy and Blessed 2014

Special thanks to Ross the Dog for being my model and not running away to hide when I put the Happy New Year headband on him.  He did roll his eyes at me and sigh like an annoyed teenager though.