At the beginning of our South Dakota trip, my sister, my son, and I cruised through the Badlands.  This tradition began in 2012 when my children and I first drove through and fell in love with the stark desolation and breathtaking beauty of the skyscraper pinnacles, rounded buttes, and neck breaking coulees.  Since then, every road trip to South Dakota includes at least one Badlands Cruise. 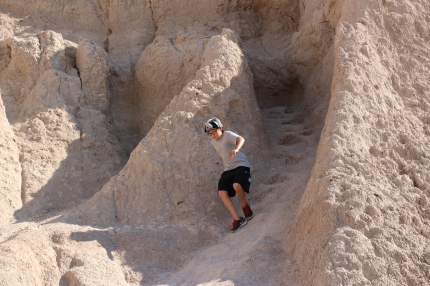 My son scrambling down the natural stairs cut over time on a Badlands formation.

We parked at the largest visitor’s stop just inside the gate to stretch and take photographs.  I was wearing a sundress  and gray Vans sneakers and my sister was wearing jelly shoes, so we weren’t dressed for hiking, but tourists rarely are.  Besides, as native South Dakotans, we had something to prove.  This was but one of our many South Dakota playgrounds, and we were ready to frolic.

Many other characters were climbing on the formations that day.  Two massive body builder types in flimsy tanks and flip flops parked next to us.  In their flip flops, they somehow scrambled up a precarious trail to a little stoop offering a panoramic view of Badlands glittering in the sun.  One of the men shed his top and began posed for his companion’s camera, the majestic scenery in the background.   We nearly interrupted their photo session when we stumbled around the corner onto the stoop, and had to turn briskly on our heels, swallowing giggles.  The man with the camera was heard to say “Oh, that’s beautiful as his friend flexed his sweaty arms.  My son was confused.  My sister grinned and murmured, “They are either updating their UFC profiles, or they are lovers, or both.”  A group of female tourists resembling Old Apostolic Lutherans climbed in matching ankle length navy blue skirts with tucked in blouses and thin canvas Keds.  Their blonde hair swished past their tiny waists and they climbed like rail thin Gazelles, speaking very quietly to one another in Nordic accents.

My sister getting a good shot for her scrapbook.

My son was not satisfied with our brief climb on the most popular formation.  He wanted a more challenging, less occupied spot.  We drove until coming to Saddle Pass, a deceptively harmless looking mound.  It turned out to be incredibly steep, with sliding sediment and pebbles galore to inhibit one’s climbing abilities.  My son easily scaled the trail and was waiting impatiently for my sister and me to struggle, red faced and heaving, up the pass entire minutes later.  This is where my sundress really worked against me.  In shorts I could have lunged and scurried, unimpeded by modesty.  In my skirt, I had to at least try to be more ladylike, especially after sensing that someone was moving up behind me, and fast, on the trail.  It was during my last effort to crest a tricky rise, while I made a most undignified scramble, that the wind lifted up the back of my dress and revealed brilliant purple Betsey Johnson underwear to the young man who chose to follow too closely behind.  He quickly disappeared up the trail, red faced and now schooled in Badlands trail etiquette. 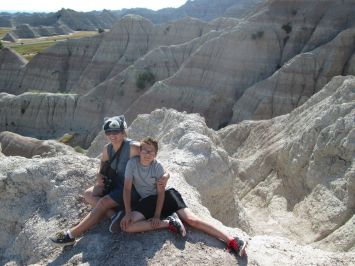 I sat down to rest, and to keep my dress from blowing up around my hips.  The view was gorgeous, and we felt triumphant.  My son, still not satisfied with the  amount of hiking accomplished, wanted to go further on.  I told him to be back in five minutes.  As much as I didn’t like to let him out of my sight, I knew that he needed to go out on his own and test his limits.  He reminds me of myself, always wanting to go further up the trail, to see what lies ahead, to push the limits and rise to new challenges.

An older couple was hiking down, slowly and carefully, speaking quietly in French.  They paused where we were resting and made a polite comment about the steep trail.  I cracked “Yeah, I think it might be easier if I just hurl myself back down the trail.”  They smiled politely, not sure if I was being clever or mildly suicidal.  I noticed that the man had a nice camera, and offered to take a picture of the couple on Saddle Pass.  They politely declined and began to move away quickly, and I sensed that behind their sunglasses, their eyes had narrowed with suspicion.  After they disappeared down the trail, my sister and I smiled and shrugged at each other.

“Did they think I was going to take off sprinting down the trail?”

We noticed that my son had been gone longer than five minutes.  I started to feel uneasy.  A young couple stopped to rest before going further up the trail.  The woman looked athletic and graceful, but the man seemed rather clumsy.  Maybe he was just nervous; maybe he was going to propose or something.  We decided to yell for Dylan to come back.

“Dylan!”  I hollered “You get down off the Badlands right now!”  The young couple giggled.  We saw and heard nothing.  My sister tried.

“Dylan, did you hear your mother?!  You get off those rocks and come back down here!” she yelled.

Within another minute we saw him shuffling easily, like a panther, back down.  His face was red and sweat trailed along his hairline, but he looked happy and relaxed.

“Did you see me?”  He asked excitedly.   “I was way over there!”  He pointed to a place far in the distance.  It seemed impossible that he could have been so far away in such a short amount of time. 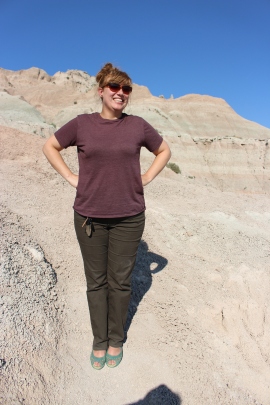 My sister, thrilled to have made the ascent in her jelly shoes.

We started back down.  My son was down the trail and waiting for us once again before we had even decided the safest way back.  We chose a very steep and ever deepening, but very narrow crevice that we could use for foot and hand holds, and we crept across.  My sister followed behind me, taking embarrassing photos when I became stuck in an awkward squat position.  We finally had to crawl out, hoisting ourselves over the scratchy edge like injured prairie dogs.  After getting back on the trail we made a dash to the bottom.  When on a steep, slippery downhill trail, I just make a dash for it and hope for the best.  The young couple we met was galloping down the trail behind us, having finished their hike.  The young man  slipped on loose pebbles and fell on his ass, confirming my suspicions about his clumsiness.  My sister and I made it down safely thanks to years of climbing on steep terrain in Idaho forests.  My son was bored, thirsty, and tired by the time we finally caught up with him.

“I’m glad you both made it back down.  I was getting really tired of waiting.” he yawned.  “I think I had enough hiking for today.”

When we got back to the car we saw the French speaking couple, parked next to us.  They were, it turned out, from Quebec.  They had changed from high tech hiking boots into regular sneakers, and the camera was nowhere to be seen.  They smiled and nodded and watched us closely as we loaded into my car.  They must have thought us mad to have been hiking in our strange clothing, with only cameras and chutzpah.  The man took a long drag on a skinny cigarette and watched as I backed out of the parking spot.  As I pulled out of the parking lot, my sister shook her head and said “Smoking a cigarette after an intense hike on a really hot day!  That is so French!”

It takes all kinds to cruise the Badlands.  I think that is why I will never get tired of going back there with my children to be part of the group of characters that hike there every summer.