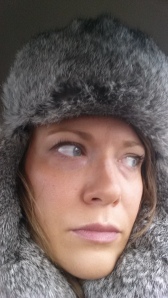 “All she wanted to do was haul firewood, but would a tragic injury put an end to her firewood hauling days?  Watch the video documentary and read the gut wrenching tale of the housewife who just…wants…to haul wood in Kansas.”

—Dramatic Voice Over that sounds a little like Sean Connery

For those of you who did NOT read my post ‘Hauling Wood.  Like a Boss’ (that would be 99.99999999985% of the world population), let me catch you up.  I LOVE to haul and stack firewood.  Call it a fetish, call it a hobby, call it redneck exercise; it gets me into the fresh air and puts me in a good mood.  It is definitely one of my favorite activities.  Today we had a short window of decent weather and a ridiculously affordable source of firewood available just minutes from the house.  Van only had to purchase a permit and hook up the trailer; I only had to wrangle the girls into the Expedition.  Then we were off like dirty underwear (which is what I suspect some of us were wearing because the car interior smelled as such during the drive to the slash pile).

As soon as we arrived I had to pee really bad (this is an important detail) and Van announced that he’d forgotten to pack motor oil for the chainsaw (of course he did).  I would have to drive to the nearest gas station with the trailer hitched to the Expedition and buy a bottle.  I have never maneuvered around, pulling a twelve foot trailer behind my already huge SUV, so I was not thrilled.  The nearest gas station was only about five miles away, so how bad could it be, right? 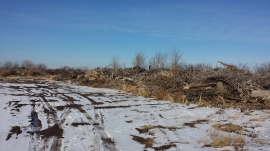 To start things off, I accidentally turned onto a dirt road running parallel to the correct road.  Why?  Great question!  I’ll get back to you.  With no place to turn around, I would have become hopelessly lost if not for a helpful turnoff leading back onto the paved road. I then had to go through three traffic circles with a maniac suffering from road rage trying to fly up my ass.  I think he cared little that I was driving a bit more slowly than the speed limit because I was pulling a freaking twelve foot trailer, or maybe he was trying to drive up onto the trailer to perform a stunt.  Either way, it was unpleasant to look in my mirror and see the vindictive gleam in his eyes as I shimmied around each circle.

Upon arrival at the gas station I suddenly realized I have never actually parked with a trailer or tried to turn around while pulling a trailer.  I realized these things as I was attempting to park, then turn around, then park again, then turn around again.  Uh-oh!  I mimicked what I had seen Van do before: looking in the side mirror at the trailer while switching back and forth between Drive and Reverse while muttering alternating curses and coaxes at the trailer.  And…success!  If the diminutive Toyota Corolla I turned around near had been two inches wider it would probably not be intact anymore…but I maneuvered without causing any damage to any property, and I found a place to park (illegally).  Problem solved.

I ran inside and skipped peeing because I was too nervous to take the time necessary for that; the motor oil was top priority.  I bought two different bottles because there was no way I was coming back for anything else!  The drive back was less stressful; no guys with road rage on my tail.  But the scenery looked different after the third traffic circle and I wondered if I had accidentally taken the wrong exit.  Traffic circles are such a pain in the…Oh crap, that looks like the turn, and signal light NOW!  Yeah, the two drivers that came up behind me (from out of nowhere) were probably not happy with my short notice, but that trailer is really good at handling corners. 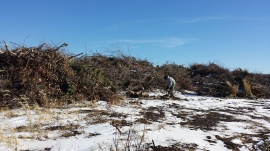 The little gravel road leading to the slash pile offered a quiet drive.  Now when I say “pile”, I don’t do it justice.  If Jack had desired firewood instead of gold coins and a goose, this place would have been his Beanstalk.  We were in Firewood Heaven.  Van cut logs while I put armloads onto the trailer.  I still had to pee really bad, and would have squatted behind one of the huge piles, but the wind had whipped the landscape into a freezing and uncomfortable place.  Bladder be damned!  I decided against baring my rear end to the unfriendly elements. 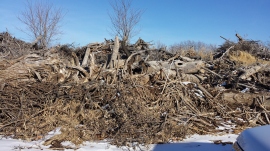 After a while, I must have become tired or careless because I lost my footing and fell.  I have been hauling wood for most my life so I know how to be careful, but that doesn’t mean I am not susceptible to clumsiness.  My bulky snow boots made my feet almost as wide as they are long, so when I tripped on a branch hidden in the snow, I fell and and landed hard on a knobby rock embedded in the mud.  It goosed me in the calf and I couldn’t get up for a good twenty seconds.   Strange sensations pulsated through my leg as I hobbled to the Expedition and drove to find Van cutting up the last part of the haul.

Even though it was very tender, I stayed relatively calm and in good spirits about my leg until we got home.   I pulled my long johns up my shin to have a look.  Then I panicked a little, and the hypertensive, slightly crazy housewife in me resurfaced.  I showed my husband, sure that he would be very sympathetic.  The conversation went something like this.

Me, with a dramatic flourish: “Look at this!  Isn’t it terrible?”

Husband, leaning veeery close, as if he couldn’t see the giant injury: “Hmm, that will be fine in a couple of days.”

Me, demonstrating more drama: “But what is it?”

Husband, already walking away: “Just a bruise.  You will be fine.”

Me, demonstrating the ultimate drama possible: “But it hurts so much; I’ll probably die from an embolism!”

Husband, turning slightly to look back at me with an amused look: “You aren’t going to die from an embolism.  It’s a bruise and you will be fine.”

Me, apparently needing the last word: “I bet I will!”

I settled down after we had dinner at my favorite Mexican restaurant in town.  My leg still hurts but I never regret any trip to haul wood, no matter how “tragically” I am injured when I fall down in the mud and snow the way a clumsy toddler might.  No pain, no firewood!

“Riveting stuff…almost as riveting as Napoleon Dynamite’s emotionally charged phone call home to Kip for a tube of Chap Stick!  You can really feel the pain!”

— Another Dramatic Voice Over

If this is made into a movie I would like Emma Stone to play me and Mark Wahlberg to play my husband.  Just saying… 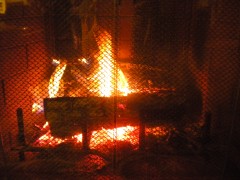 Little known fact about me: I have an obsessive compulsive fetish when it comes to hauling and stacking firewood.  Yeah, weird.  I love it so much that whenever we go visit my sister and brother in-law I get really, really, pee my pants excited if the possibility of wood hauling and log stacking emerges.   Stacking logs into neat piles makes me happy!  Big piles, little piles, piles that go on forever…  If you have stray logs at your house, and I come to visit, I will stack them for you.  Try and stop me!

This time of year usually allows one last big firewood haul before the cold sets in.  Sis and Bro have a massive wood burning stove to heat their home, so they need a huge supply of firewood, and since Van and I have a little fireplace (really just for ambiance because it puts out practically no heat) we also need a small stash to get us through the winter.  During Thanksgiving Weekend, my husband, daughters, and I hauled wood on a neighbor’s acreage.  He has a perpetual supply of dead and fallen trees needing to be cleared and had given us permission to clear some trees that could be used as firewood.

It was an incredible morning!  The sun was out, the air was warm, and we were all in great spirits as we pulled up to the first fallen tree.  Van started up the chainsaw and made short work of the tree, then the girls and I started gathering up the stout logs and stacking them into the trailer.   For this story I couldn’t resist using Lonely Island‘s “like a boss” cliché because when it comes to hauling and stacking wood, I DO NOT mess around.  Laugh if you must, but I really get into the techniques of log organization.  We all have our OCD fetishes!

I haul firewood magically and authoritatively, like a boss, because I grew up hauling firewood.  We always had a wood burning stove to heat our home, and I still remember stacking log after log while my father hand split massive trunks with a hatchet.  I probably hauled and stacked an entire forest of firewood by the time I turned 21.   I can pick up an armload of logs and throw them onto the trailer in such a manner that they neatly stack themselves.  I can stack an eight foot wall so that each log fits against the others perfectly and the wall never even considers trying to collapse during the winter months.  Because I am the boss.  I can do all this quickly and tirelessly, and I won’t stop unless I get hungry.  Then I take a break and eat, like a boss. 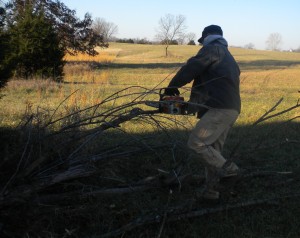 Cutting up a dead tree for firewood.

Okay, I think the cliché has served its purpose to express how ridiculously much I LOVE to haul and stack wood.  Anyway, the best part of the family outing was just watching the girls get a kick out of nature.  They were like little foraging animals, digging under dead leaves for acorns and peeking in old hollow tree trunks.  They rustled around in the dry grass and searched for squirrels and chipmunks, then gathered kindling and smaller logs while I barked orders and safety reminders like a…drill sergeant.  We ended up with a nice cord plus load of firewood and the floor of my Expedition was covered in acorns when we were finished.  I guess that means my daughters can gather acorns.  Like a boss.  That is the last one, I promise!

P.S.  I added the Wikipedia link for those unfamiliar with “like a boss”, which is basically doing anything aggressively and with authority (which is how I approach firewood).  I chose not to attach the link to the video on YouTube because I didn’t want close friends and family members wondering if I need Jesus.  The Wikipedia description is graphic enough.

The best part of our firewood haul: 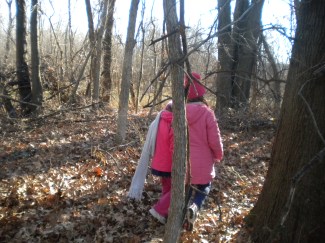 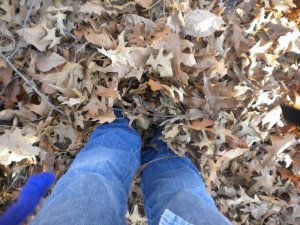 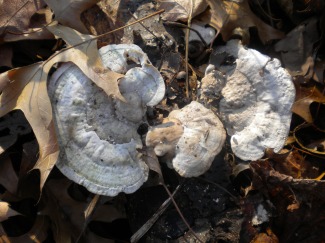 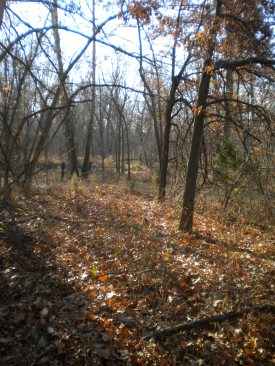 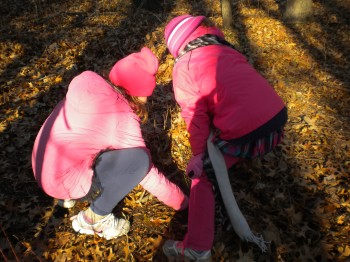 Digging for acorns under the dry leaves.