Last week was special for my husband and for me.  To us, Veteran’s Day is as festive as Christmas, Easter, our wedding anniversary, and various family members’ birthdays.  I have now been a veteran for ten years, a little longer than I’ve been married, making this a milestone year in many ways.  I’ve always been reluctant to bask in the adoration of well wishers on Veteran’s Day, but my husband loves free lunches, so he was impatient to get me out of the house.

“Are you ready to go?”  he shouted into the bathroom while I was still shampooing my hair in the shower.

“Absolutely.” I yelled back.   “I think I’ll just go like this.  Naked and sopping wet.”

We were going to hike in a beautiful state park, eat a picnic lunch, and talk about sentimental things (my idea), but the weather intervened.  The temperature dropped, the wind picked up, and a hike no longer sounded remotely fun.  Van suggested we get as many freebies as possible and take advantage of the Veteran’s Day sales with some early Christmas shopping.  It turned out to be a fantastic day, and tagging along with him, doing everything that made him happy, made me happy.

I haven’t always been able to relate to my veteran status.    When I returned from deployment in 2004, I just wanted to scrub everything about the Army off of me and be a civilian again.  I bought girly clothes, high heels, and lots of new makeup.  I dated a couple guys, one who was also a veteran and actually remembered seeing me working in the chow hall at my camp in Baghdad!  I got a job as a receptionist and shopped at Wal-Mart in the middle of the night when I was really bored.  I didn’t spend much time thinking or talking about my deployment experience.

Five years later, it was time to celebrate five years of marriage to a soldier, and the Army life had become a steady reality.  I’d traded in camouflage and combat boots for formal ball gowns and impossibly tiny handbags that nothing fits inside.  Now here I am again, another five years later.  I wear fewer dresses and more denim.  People tend identify me as an Army spouse rather than a veteran, and that is okay because that is my more active role.  The old guys at the VFW will need a bit more time to process that I earned my veteran status before my husband did, but eventually they will catch on.  I do talk about my service more, but it still isn’t a comfortable topic.  It’s taken time, but I can accept praise, even though, as my sister claims, I am still terribly humble.

My son, the original reason why I went to Iraq: a better future for him.

I’ve also become accustomed to the reality that not everyone loves a veteran.  This Veteran’s Day, a man gained national attention after posting a harsh anti veteran statement on his Facebook page.  The rant went viral and incited angry responses, phone calls, and even death threats. It was sad to see, on a day when we veterans should be celebrating our roll as protectors and peacekeepers, so many were caught up in one person’s ignorant outburst.  It’s no fun to read something nasty pointed in one’s general direction, but receiving insults simply for ‘being something’ should never deter us from continuing to be good people, and veterans are the best.   I hope that this man, and others who deeply dislike veterans, could see through our eyes for one day, and look at the world from a warrior’s perspective.

Sharing MREs above a breathtaking view in one of Saddam’s palaces.

Although it has been difficult to feel as though I deserve the title ‘veteran’, after ten years I am now proud and grateful to count myself among the courageous and loyal.   If I hadn’t joined the National Guard and deployed to a combat zone, I might not have learned the most important lessons for life. First of all, people in a war zone take care of others before taking care of themselves.  I don’t see that happen very often in the civilian world, but I see it all the time among veterans and military families.  It’s called Selfless Service, and it is one of the Army Values.  While deployed, I also witnessed many acts of kindness and courage that resulted in lives being saved.  Some of these incidents involved soldiers saving the lives of Iraqis, with no forethought to their own personal safety or profit.

In the combat zone, generosity was another lesson learned.  Every day I witnessed soldiers showing generosity to each other and to Iraqi children, often giving away their only blanket or last ration of food or water without complaint.  No questions were asked, but if a need was identified, it was filled immediately.  Soldiers also cultivated deeply loyal friendships with each other, and would do anything to support and uplift their friends.  Ask any veteran if he or she has a lifelong friend from war time, and odds are that veteran will have a very interesting story to tell.  Personal sacrifices every day become commonplace habits for soldiers who work closely together, and selfishness fails to exist.  But perhaps those who go to war are the only people who really understand this system of camaraderie.

A little girl who tugged at my heartstrings, and continues to do so.

Connections also form between soldiers and civilians in occupied regions, even if this is not popularized or publicized.   I was told a story by a weary young soldier who tried everything to save an Iraqi girl suffocating from an asthma attack.  Seeing that he was a medic, the girl’s father thrust her into the soldier’s arms and begged for help.   Unfortunately, the unit had no medicine for asthma, and the girl perished as the soldier held her.  Another young soldier single handedly arranged a massive humanitarian mission to donate school supplies to refurbished Iraqi primary schools in the Baghdad area.  Her mission was so successful it enabled Iraqi children to return to school with the kinds of supplies American children take for granted.  Another soldier tried to adopt an Iraqi toddler when her parents insisted she take the girl so that at least one of their children would “have a rich and safe life in America.”  The soldier pursued adoption through Army legal channels, but was informed that it would be impossible.  She was too young, too poor, unmarried, and Iraq had no political infrastructure for her to make a legal adoption.  To this day she remains brokenhearted over what she views as her failure.

When I deployed ten years ago, I didn’t realize that people who despise veterans actually exist, or that I would be accused of being some type of soulless, mindless government robot trained to create carnage and desolation.  I want to encourage other veterans to remember this: Your service is not defined by what someone thinks of you, and you don’t owe anyone an explanation.   I didn’t serve in the capacity or manner that anyone else can imagine, and  my character isn’t defined by my service or by a stranger’s opinion of me.  I endeavored to serve mostly as a humanitarian, holding my hand out to the downtrodden.  And I continue to do so.  That is the role that I believe every veteran is responsible to uphold throughout life. 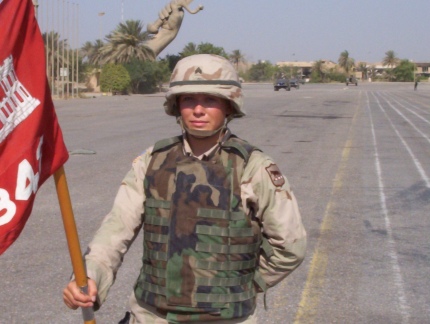 The last time I kind of looked bad ass.

One last story, told to me recently by my husband.  This is the kind of behavior demonstrated all the time by soldiers and veterans in my life (and after being around such positive energy, why take any haters seriously?).  A soldier new to my husband’s unit was in a minor auto accident and needed medical attention.  Another soldier saw the accident and could have just driven away in the dark; instead she reported the accident and insisted on driving the injured soldier to the hospital.  She then sat with the soldier until my husband arrived.  She had no obligation to do so, but she put the needs of a fallen teammate first, sacrificed her time and requirements, and acted in the truest form of kindness by saying “Put some of that burden on me”.

Ten years from now I hope that she looks back at her time in service and feels good, the way I feel good, about being a veteran.