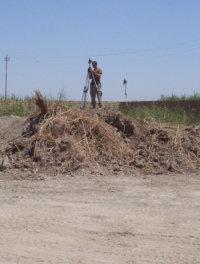 After U.S. troops occupied Iraq, who do you suppose was instrumental in developing the infrastructure to support the camps and Forward Operating Bases?  It was the 51 Tango, the survey engineer!  Tangos surveyed timeworn sites to which no known maps existed, trod ground on which no previous American engineers had ever set foot, and created sense and order out of chaos so that camps, airstrips, helicopter pads, schools, clinics, roads, canals, and civilization itself could be built up and maintained.  I ran into my former Tango drill sergeant from Fort Leonard Wood while I was waiting to depart Kuwait, and being able to discuss real survey missions with him was incredible because he was simply the best role model a buck sergeant could ask for.  Now a Sergeant First Class with a large team, he proudly described what his surveyors had accomplished and affirmed his hopes for the Tango legacy in Iraq.  He also gave me a challenge: to be a pioneer in engineering by making improvements wherever I led my team to leave Iraq better than I had found it.  “That is what Tangos do; we are the vanguards of engineering and the ones who make projects possible.  Do something new and make me proud!”  A remnant of my old survey journal shows evidence that my team did indeed pioneer the engineer field with projects such as innovative topographic surveys of roads, the ground breaking of Camp Victory, courtesy of my National Guard unit and my survey team, and my personal pride and joy: the establishment of the first military soils testing laboratory in Iraq.

Establishing benchmarks on a survey expedition at BIAP.

Notes:  Have observed not to chastise Iraqis publically.  Compliment their work and then suggest how it can be improved.  Do not be surprised if they listen politely and then do the exact opposite of what you suggest.  Concrete on a slump test should be 4-6 inches to pass.  Smooth stones in concrete are a NO-GO!  Nothing should be mixed in with concrete (ie: concrete bags, plastic bags, debris, any foreign matter) as it will create voids and weaken the concrete.  Soil must be wetted cautiously as too much water will create a soup that must dry for several days before work can continue.  Iraqis do not understand this, and often do not heed our warning (see all above).  Spongy, soft spots in the dirt work mean that there is a pocket of wet, soupy soil underneath and this will cause problems in the future.  Iraqi engineers say “It’s good!  Cover with asphalt, it will make stronger!  Yes, the plastic bags good!  Make everything stronger!  Very good!”  They think that a strong surface will actually reinforce the weak soupy interior.  This is not true.

Silhouettes of soldiers and civilian workers on a road project.

Notes:  We haven’t done any “real” surveying in a while!  Now there are plenty of projects.  Got a “new” laptop for the section, but the CD drive is out so it already needs to be serviced. 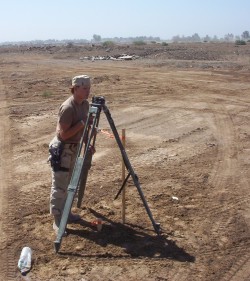 Leveling the tripod to start a survey project.

Notes:  Am considering having weekly survey pow-wows to gauge my team’s ideas, opinions, desires for future missions, etc. and get an impression of how their morale is holding up.  I also want to ensure that they are getting the information that they need to complete their various missions.  Since attitude [of troops] reflects leadership, I’d like to see if there is more I can do to be a positive role model and leader here. 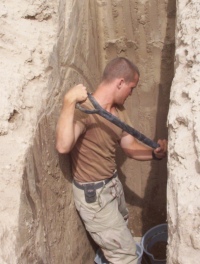 Collecting samples from layers of soil at a BIAP road site.

Notes:  Rough week, but all turned out fine.  We decided to have weekly AARs to discuss survey issues that we encounter through the week.  Daily supervised PMCS of our vehicle, known as X2, has been implemented since we use the vehicle constantly.

Running tests on soil in the laboratory.

Notes:  Fun, fun, fun! I LOVE soils!!  We had a Tango meeting; all the Tangoes on BIAP got together to combine talents.  I did not know there were so many of us here at one time.

Notes:  I hate this place!

Taking an informal width measurement of a canal: “It’s as wide as I can stretch my legs!”